To protect the press freedom of Sri Lanka

To popularize press freedom as a cultural element for national development

Forward March of the Sri Lanka Press Council since 1973 …..

The first Chairman of the Council, Senior Counsel Mr. A.K. Premadasa, who rendered yeoman service to create the legal framework and physical infrastructure required for its firm establishment had said goodbye to his post in 1974. Later, a veteran politician well-revered in the Government as well as in the Opposition and a Barrister, Mr. P.M. William de Silva has been appointed for the post and served till 1977. After Mr. William de Silva, Presidents Counsel Mr. J.W. Subasinghe being appointed to the post in 1978 has served till 1986.

After clearing the initial hurdles the Press Council has taken measures to introduce a Code of Conduct in 1981 with the contribution of veterans in the field, University lecturers, clergy and various mass organizations. Prime objective of this Code of Conduct is “to encourage journalists to act with self-discipline rather than legal pressurizing” Accordingly, the main focus of the Press Council during this decade (1973 – 1983) was to demolish negative responses aimed at the Council and to conduct fair and unprejudiced inquiries and to cement the fact that the Press Council is vital for the betterment of Democracy. But at the time, Press Council had been a novel experience in Sri Lanka and therefore, many were there to find fault with.

During the decade from 1983 to 1992, the misconception that the Press Council is an obstacle to press freedom has been dissolved. The few years of this decade has gone in to history as the period in which the proposal of conducting seminars, workshops, courses and publication of literature on journalism had been submitted to the Board of Directors. “Puwathpath Kala Sameeksha – I”, the first compilation published by the Press Council has been first published in year 1992.

After the tenure of the Presidents Counsel Mr. J.W. Subasinghe in 1986, Mr. M. Hussain, Attorney-at-Law has been appointed in year 1987 and has been served till year 1991. Later in the same year, Mr. A.L.M. Fernando, Attorney-at-Law has been appointed as the Chairman. During the decade of 1993 – 2002, the first publication of “Puwathpath Kala Sameeksha – I” has been launched by the Sri Lanka Press Council in 1993 of which Prof. Sunanda Mahendra had been the Consultant Editor along with the contribution of all other veterans in the field. Furthermore, it had provided the opportunity for a series of controversial articles expressing views on various subjects in different perspectives. Journalists too had voluntarily appreciated this compilation. “Puwathpath Kala Sameeksha – I” can be recognized as standard literature
related to the field of mass media. Subsequently launched “Puwathpath Kala Sameeksha – II” have also been widely acknowledged. Some journalists referred it as “Pen Thudaka Aravindaya” (Blooming of a Fountain). Even today, these two books are being used as hand books in Universities in the stream of mass communication. Furthermore, the book “An Access to Provincial News reporting” (2000) published by the Press Council is a guide to provincial journalists.

The primary focus of “Puwathpath Kala Sameeksha – III” (2003) has been to present a scientific research study on obscene publications. This book has achieved key attention among a handful of publication on the subject within Sri Lanka.

Sri Lanka Press Council has continued to conduct workshops and seminars and during year 2002 alone 35 awareness workshops for students and journalists. In addition, several diploma courses; i.e. Preparatory Diploma in Print Media, Bi-lingual Training Programme for Journalists and language proficiency courses have been introduced by the Press Council.

During the decade, several professionals have chaired the Sri Lanka Press Council from time to time. After the farewell of Mr. A.L.M. Fernando, Attorney-at-Law in year 1994, Mr. A.A.De Silva, Attorney-at-Law has been appointed to the post in the same year and he held the post till 1997. In year 1998, Dr. P.V.J Jayasekara had been the Chairman of the Press Council after Dr. Jayasekara bid farewell in year 1999. A renowned Presidents Counsel in Sri Lanka Dr. Wijayadasa Rajapaksha had been appointed as its Chairman in year 2000, where he continuously served till year 2001. During his tenure, Sri Lanka Press Council could remarkably achieve its desired goals.

In year 2009, a Board of Directors chaired by Prof Somarathna Balasooriya has been appointed to the Press Council. Gradually, conducting various courses and workshops and launching of publications have been re-commenced.

Veteran Presidents Counsel W. Dayarathna held the post of Chairman from year 2010 to 2014. In year 2015 the Council has proceeded under the presidency of another reputed Advocate as well as a writer, author and a critic Counsel Koggala Wellala Bandula while further reactivating various programmes implemented. Accordingly, following the footsteps of previous Chairmen, complaints received against newspapers are inquired systematically, efficiently and in an unbiased manner. Even though a number of complaints have been received by the Council, less than 10 complaints have issued orders of correction. It is the anticipation of the Council to conduct inquiries with the concurrence of the two parties and to ensure public rights while making press freedom more meaningful.

From the date of re-functioning, the Press Council has received number of complaints from which the investigations of over 90% of the above have been completed. Whenever the Council receives a complaint, it takes every possible effort to initiate investigations at the earliest and to come in to a conclusion within 3 months.

In keeping with the recent social, economical and political changes, Sri Lanka Press Council too has changed its perspectives. Accordingly, awareness of journalists and their welfare have become its foremost priorities. It is the expectation of the Council to create journalists, who could face future challenges by being empowered with theoretical and practical subject-related knowledge and to engage them in the national development drive and to create well-disciplined new media culture. Among programmes initiated in realizing above goals is the one year Diploma in “Journalism and Communication Studies”. This Diploma is designed for professional journalists as well as new entrants in the field and it has been based on the UNESCO guidelines on journalism training. The awarding of certificates of the 7th batch of this Diploma has been held recently under the patronage of the Minister. Studies of the 8th batch are currently underway in which the course co-ordinator has been Prof. Sunanda Mahendra.

The Council is with the view of re-commmencing the English Language Certificate Course initiated with the intention of upgrading language proficiency of professional journalists. Furthermore, the Council is conducting seminars and discussions on the subject prescribed for G.C.E. (A/L); Media and Communication Studies to update knowledge of students in rural areas away from the city of Colombo. Accordingly, a number of workshops have been conducted at Education Zonal level. It is expected to upgrade media literacy and appreciation in school students.

Sri Lanka Press Council identifies and conducts researches on contemporary significant issues with social and cultural repercussions and guides respective parties in its relation. Accordingly, the Council is currently conducting several researches in collaboration with Universities. Since its inception in year 1973, the Press Council has launched several publications from time to time. Even though these publications were centered around the journalist and journalism at the beginning, the Council has decided to launch publications to cover various other media.

Accordingly, the magazine “Maadya Sameeksha I” has been launched in year 2010. In year 2011, five hand books for journalists named “Sannivedana Vividhanga” – (“Source and Devlopment of Sri Lankan Newspapers”, “An Introduction to Media Literacy” , “Language and Communication”, “Media Educaion and Newspapers” and “An Introduction to Photographic Journalism”). Sri Lanka Press Council has launched “Maadya Sameeksha - II” to coincide with the 40th Anniversary of the Press Council which had been edited by the senior journalist Karunadasa Sooriyarachchi.

Among other functions conducted by the Press Council we find conducting subject related seminars and workshops at the request of private institutions and organizations, registration of School Media Associations, conducting Symposium on significant publications and conducting a series of monthly seminars. Furthermore Certificate course and regional workshops for journalists, organizing research on current themes collaborating with universities, compiling a Glossary of Technical Terms-Communication Studies are other significant contributions. While concerning the welfare of the veteran journalists who have immensely contributed for the sector of media, the council has donated Rs.50, 000 for the senior journalists A.L.K. Perera, Sunil Madawa Premathilaka and Meril Perera.

In keeping with the objectives of Sri Lanka Press Council, to uplift the welfare of the journalists, the latter has decided to provide a free school supplementary pack for their children this year for the series of its programmes. By this means the council expects to provide a relief for journalists who work amidst enormous economic hardships.

There’s a necessity in amending Press Council Act No 05 of 1973. The amendment should be done covering all media in a formal, extensive manner. Even in the manifesto of H.E. the President “Vistas of Prosperity and Splendour” it is stated as below.

(Press council will be re-structured to cover electronic, print and other new media and made to adjudicate on matters relating to journalists and media institutions. It will also act as a centre to promote media education)

All Chairmen and Board of Directors appointed from time to time had been well-versed veterans equipped with knowledge and experience in each field. The service of the members of previous 20 and current Boards of Directors in successful and effective operation of the functions of the Council should be appreciated. In addition, the contribution of the Press Commissioners, who were responsible for its administration, during the past forty years is commendable.

It will be the expectation of the Sri Lanka Press Council to continue the service rendered by the Council during past four decades amidst public accolades in a far more attractive and effective way while educating journalists and securing press freedom as well as public rights in realization of the ultimate goal of creating a better media culture. 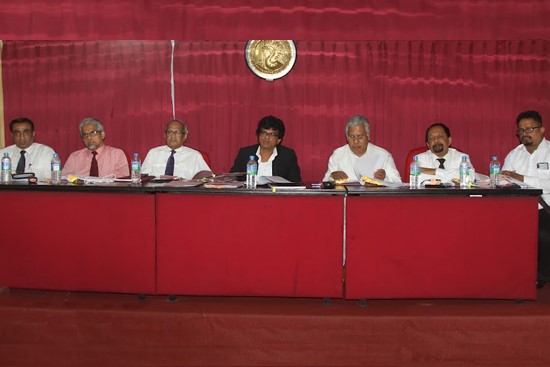 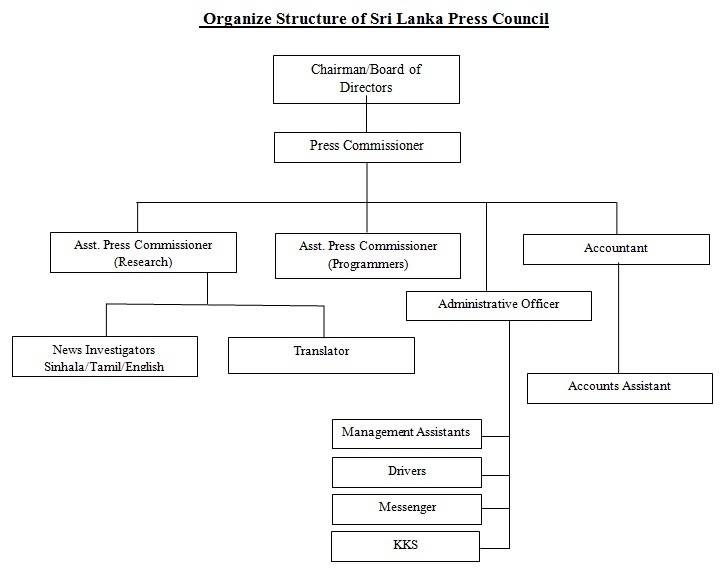 Inquire into complaints against Newspaper

Any person organization or an institution can make complaints against an injurious article published in any newspaper published within Sri Lanka. Complaint received will be investigated upon calling for two parties concerned and legal action could be taken according to the Press Council act.

Any article/ feature published in a newspaper based on inaccurate or defamatory information the readers can complain to the Press Council.

Complaints should be submitted by registered post or by hand with a copy of the relevant paper article. The investigation procedure would be more efficient, if the complaint is submitted with an affidavit.

The Council received complaints during the year 2012 and the actions taken.