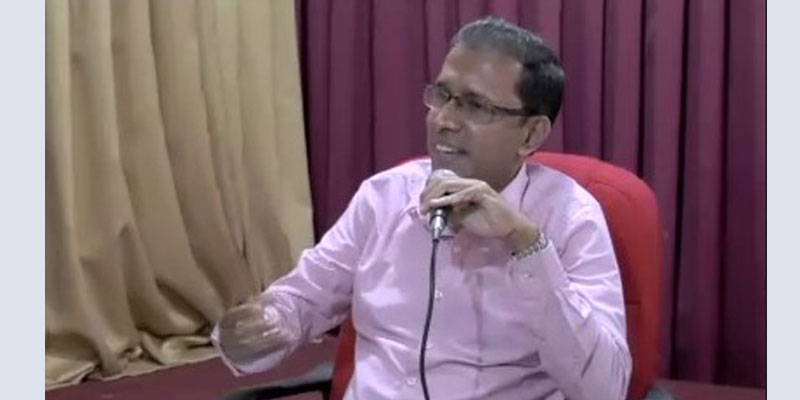 The fourth session of the “Sanniwedana Kathikawatha” programme on Zoom Technology organized by the Press Council of Sri Lanka was held on 31st March 2021. Entitled "Poetry and Social Media", the event was attended by veterans including state award winning poet Sunanda Karunaratne.

Poetry and social media
The "Poetry and Social Media" “Sanniwedana Kathikawatha” programme organized by the Press Council of Sri Lanka was held with the presence of State Award winner Kiwiara Sunanda Karunaratne ,Commissioner of the Press Council Niroshana Thambavita and with the participation of a group of subscribers under the guidance of journalist Gamini Kandepola. We intend to present a review of the discourse on poetry and the functioning of social media. Giving access to the discussion, Press Commissioner Niroshana Thambavita said, “The problem that many literary creators in Sri Lanka have faced for a long time is the lack of a medium to take their expression easily to the general public, and the limited space allotted to it through the media.

However, due to cyberspace and the social networking opportunities that have been created through it, this situation has changed and nowadays social media has become a good platform for creative writers to take their creations to the general public. "

Poetry is a place where the chaos of life is put to rest. In fact, the phrase that tastes soulful can be interpreted as poetry. It does not have to start with delight and end with wisdom. It could even be something that gives both delight & wisdom. Poetry is a part of personal life and at some point we are all poets. In the age of social media, everyone is a poet,” said state award winning poet Sunanda Karunaratne. Poetry is a social bond. In a way, poetry can be interpreted as a social reading as well as a social commentary. One of the good things that has happened with the rapid spread of the internet in recent times is the arrival of a new generation of designers. There are a lot of people who have paved the way for social media to showcase their talents.

This is a good opportunity to explore poetry and social media, which are part of this unique content, as it affects a large number of people. This gives the individual a wide opportunity to express their views and communicate it to the general public. This has provided a lot of space for it to nurture creativity. The result is the emergence of poetry and poets in social media

But is poetry properly socialized through social media? It is timely to discuss that separately. Focusing on this, the scholarly discourse discussed whether poetry and social media have a positive or negative impact on society as well as the individual. Poetry is a philosophical thing .Bashor, as Kaiyan says, is rare in poetry .It is not possible to define what poetry is .It is not appropriate to use old criteria to measure its quality .Poetry published in cyberspace is a separate concept .It should not be compared to poetry in other times. It is an art associated with populism published in another space.

Today, a large number of creators are emerging through social media, which has created a significant inclination towards art among the present generation. There are a number of factors that contribute to a person's inclination towards this tendency. Self - expression has given the opportunity to express one's feelings through social media .I think it is a positive aspect that it has a quick reader response.

Social media began to be widely used by the general public at the beginning of the twentieth century. With the proliferation of new media in the world, social media has become one of the most powerful media in society, playing a significant role in modern life. The advent of social media in such a space has had a positive impact on the opportunity for innovators to socialize their creative talents through this. Therefore, it is a good trend that anyone can create a space through social media such as Facebook, which is not available through the media.

The creations that are presented on social media could get reader feedback in a very short time. In the past, printing as a book, publishing in a newspaper, magazine, etc. became the means by which new poets could take their creations to society. But the present generation, as in the past, is not as fatigued and interested as before publishing their poems in a newspaper or magazine because social media has created the space for it.

This is because they believe that the shortest way to easily and quickly take their designs to their fans is to post them in social media spaces. However, as in the past, newspaper poetry still has a social value, said Ven. Batuwangala Rahula Thero, who joined the scholarly dialogue. Improving poetry? Or is it repression? It is often influenced by the prevailing social conditions. Often the subject matter for writing poetry comes from within society itself. It is the reading of the common experiences of social institutions, injustice, equality, law, cultural conflicts, problems, etc. that man experiences in the social context by creatively and smoothly touching the thoughts of individuals.

Many of today's poems are based on social, economic and political issues .Sunanda Karunaratne explained that in many cases these poems are published as short poems.
An abandoned umbrella
Falling raindrops
A lonely bench

Talking to images is a feature here .You can see how the creator has tried to present this metaphorically by creating a feeling in the receiver. Another result is the emergence of poets' associations in cyberspace and the rapid increase in the number of creators. Many of the participants in the discussion were of the opinion that they could be seen building poetry dialogues, launching poetry collections, as well as identifying themselves through social networking sites and organizing social gatherings, and building their identities through creative expression. There are almost no restrictions on social media that give the creator unlimited freedom. The lack of gatekeepers can be cited as the reason. That is why modern designers transcend grammatical, spatial, and cultural boundaries. But in this space we can see examples in our society where artists play a positive role in socializing alternative ideas.

It was further clarified in the discussion that the conversations that take place in this space also play an important role in getting the information the person needs as well as maintaining their social as well as interpersonal relationships. One of its strengths is that it is easier and quicker to publish on the Internet than it is to be published in newspapers, to be able to run its own blog, and to be able to easily take readers to social media such as Facebook, allowing amateur writers to express themselves.

But we must keep in mind that the challenges we face in the life of digital literature are not insignificant. There are still instances where this has led to breakdowns in various spheres of society due to the possibility of irresponsible use without regulation. It is also a problem for the individual to move away from real social life and confine himself to the internet. Another challenge is the greater use of technology could expand the space for the collapse of the individual's imagination and creativity.

People who do not understand what poetry is also publish poems on Facebook. Some people go beyond such personal experiences and narrate the experiences of the general public. Facebook is being used for a variety of purposes today. This has become a weapon that has a huge impact on all sectors of the country as a result of the increasing tendency of even the general public to use social media.

The general response from most of the participants in the discussion was that if this is used very strategically, even an amateur designer will have the opportunity to take his work to a wider readership and the opportunity to study various literary texts through this.